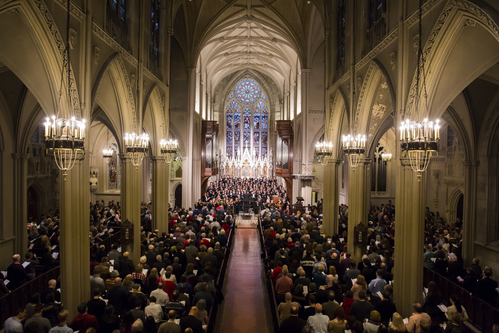 I just finished singing Beethoven’s Missa Solemnis in a concert as a member of the Grace Church Choral Society, and it was the most technically difficult piece I have ever sung in a choir. It was a single piece of concert length, a mass setting, as is custom for our spring concerts. It was all in one language: in this case, in Latin. This is different from our holiday concerts in the winter, where we sing a variety of Christmas-y and otherwise celebratory works in a variety of (European, Christian) languages, including English.

Now, I can translate every word of the ordinary of the mass, which is the term for the hymns that are sung at every mass, as opposed to those that are proper to a particular occasion. This is partially due to the Latin classes I took in high school and college, and also partially due to the fact that the same set of texts have been set to myriad different musical settings by many composers, but primarily due to the fact that the same prayers are used in even modern English-language recensions of the Western Rite, among not only Roman Catholics but other liturgical western churches, so I’m actually singing hymns that I’ve sung or said my entire life in English.

Given this, I was a little surprised when a dear friend of mine was disappointed to learn that this concert would have no components in English. I pointed out that the translations would be available in the program, but this didn’t really change her opinion. I was a bit taken a back by this opinion: I had felt at the time that the point is the music, not the words, and that can be gotten without understanding the words.

This was an unfair position for me to take, since I do understand the words, and thinking about the meaning of the words, I later realized, was a key part of my experience singing in the concert and in rehearsals, to the point where I often am tempted to cross myself at those points where, liturgically, I would cross myself if it were an actual mass. Furthermore, the meanings of the words is something we discuss at the rehearsals: the word “descendit” — meaning “he came down” — is set by Beethoven to descending intervals, and the word “ascendit” — meaning “he went up” or “he ascended” — is set to ascending scales.

My reaction to this is usually that it’s good music and good words but this literal alignment of words to musical phrases is a bit trite and overwrought. I say “usually” because our director John Maclay did something in one rehearsal for this concert which has changed my mind about this: he sang a section of the piece in English translation. “For us humans, and for our salvation” he sang, and all the sudden it felt not trite but completely poetic and integrated and fitting that the words match the vibe of the music. “He came down,” he sang, and the descending interval brought out the meaning of the text and the text gave context to the music. “From heaven,” he sang, and the triumphant high notes matched the words so well I felt like I could see the angels themselves in their perpetual heavenly worship.

I was flabbergasted. These motifs that I remember having dismissed as trite suddenly seemed deep and fitting when I heard them in my own native language. And I realized that if I were more skilled and practiced in Latin — as Beethoven and his contemporaries certainly were — I would have felt similarly without any such device. No wonder my friend prefers the songs in English! It’s not because she’s not paying attention to the music, but because they’re supposed to go together as an artistic whole. I realized this before, but had not as fully appreciated it until we had done this exercise.

For the rest of the rehearsals and for the concert, I tried to not only think about the meaning of the words, but imagine how they would sound to me if they were sung in English.

And from this I got a number of insights. I realized why for one portion of the “Credo,” an ancient recitation of Christian beliefs, the word “credo” — “I believe” — was sung repeatedly in the background while a list of beliefs was sung quickly. Instead of meditating on each individual belief, the effect was something along the lines of “look at all these dogmas I also acknowledge,” an appropriate measure for the section that mostly discussed the church and her rites, giving, at least in my view, the message of “I believe these things not because I fully understand them but because the church says so, and I believe them fervently.” It was a type of emphasis that seemed to underscore and lend earnestness to the text, to an extent that I imagine might have made non-Christian members of audience feel uncomfortable if it were in English.

These insights might perhaps seem obvious to anyone who has enough Latin to know what’s going on and enough knowledge of history to know what Christianity and music was like in Beethoven’s time, but they were new to me, and they seemed profound. So I understand now better why some of my friends prefer more of the concert in English, and realize that, even though I know enough Latin that I could translate the whole concert for you, even I would benefit from singing in a language I had an actual fluency in. No wonder the Protestant Reformers were so interested in having church in the local vernacular!