Just wanted to write up a summary of random notes from my Switzerland trip, not including the conference which was also a lot of fun but I think less interesting for my non-programmer friends, slash it might make for a better separate post.

It was relatively easy to buy a Swisscom SIM card in the airport, although they did not offer to set it up in my phone for me. This would’ve been useful, as it turns out my phone was locked (which is more an idiosyncracy of the US as opposed to Switzerland). I instead ended up purchasing a mobile hotspot (the German word for which, I was told, was “Mobile Hotspot”), which was easy to set up and worked perfectly with my phone. 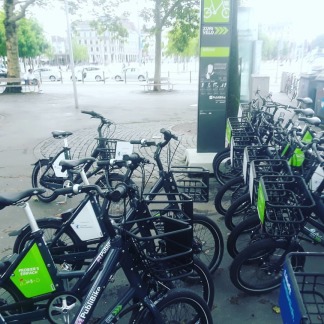 The bikeshare app I ended up installing was PubliBike. Bikes here are for some reason known as “Velos,” which I can’t find in any German dictionary but apparently is from the French word. There are many signs up all over the place informing you that you can’t leave your Velo on this wall or that railing, some of which include threatening pictures of them being taken away by a truck.

PubliBike works via BlueTooth, which was frustrating at first because I knew that my cheap Samsung, in addition to being locked, has bad BlueTooth support. I thought this was going to keep me from using the system at all, because I also didn’t realize when they said to hold your phone 20cm away from the lock, that you needed to make sure it was far enough away from the lock as well as close enough. I didn’t understand at first why they used BlueTooth rather than using the Internet and a code (like CitiBike does) until I read the troubleshooting website +++ it doesn’t require the Internet to work. Given that my mobile hotspot is often low on battery (is anyone who knows me surprised by this?), this seems to have been the correct decision.

It works by locking and unlocking the rear wheel. The stations just have the bikes up on kickstands — no docks, unlike CitiBike. I feel like that should be a good way to get 10% of your fancy new Velos stolen each night, but it seems to work. I guess they probably have security cameras in the actual stations. The wheel-lock system does have its advantages though: you can lock this partway along your ride to go into a shop or a public restroom (marked by WC everywhere). This was extremely convenient until it failed to re-unlock with my crappy Bluetooth, and I had to carry the bike 5 blocks on the street while being worried I looked like a thief.

I don’t know some of the biking laws here but it seems intuitive enough. The surprisingly big gotcha is that it’s harder to tell if streets are one-way here as opposed to New York City due to the relative lack of street parking. I didn’t realize how much I relied on which way the cars are facing to determine which way it might be okay to bike. It doesn’t help that often streetcars and bikes are allowed to go both ways on an otherwise oneway street.

One welcome difference is that everyone seems to be more okay with riding on the sidewalks here — certainly many of the bike paths are on sidewalks rather than on the road itself, and many of the sidewalks that don’t have a specific section for bike paths nevertheless have signs indicating that cyclists should use them.

Some street lanes are the same system, no sharrows but lines directing you onto the lanes, and many of them are too narrow for a car and a bike by NY standards, and yet cars will pass you with barely any extra room, which is scary.

Also, the rails for the “busses” are everywhere. Be careful and don’t try to move across them too slowly or subtly, or your wheel will get abruptly stuck, which is inconvenient, especially if you’re going quickly. 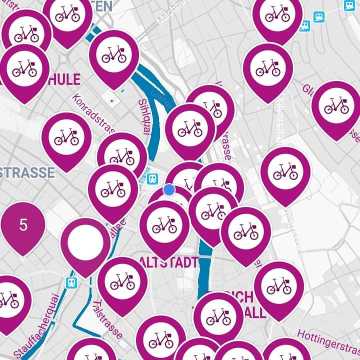 The PubliBike stations seem reasonably spaced, but I suspect they don’t go as far out into the outer regions of the city as CitiBike does. Then again, I don’t know how much outer regions Zürich really has compared to New York.

I’m trying to figure out if cycling is safer and a bigger deal here than in New York. There seem to be about the same number of cyclists around, but fewer people, so I think that makes for a higher proportion. I haven’t actually checked the data, but I was certainly happy to see a sign (confusingly on the outside of a bus) telling you to check for bicycles when leaving the bus. Hopefully they have them on the inside too — I wouldn’t know, I’ve been biking instead of using the bus.

There are more public bathrooms than in NYC, and unlike in the US there are signs telling people where to find them for parks where it’s a common need. They are willing to charge for them when that helps with maintenance, although some park bathrooms were both free and clean. I wish NYC had more paid-for public bathrooms. I don’t want to have to pretend to want to buy a coffee, insult the proprieters by asking if they have a bathroom first, etc. when what I really want is a bathroom. 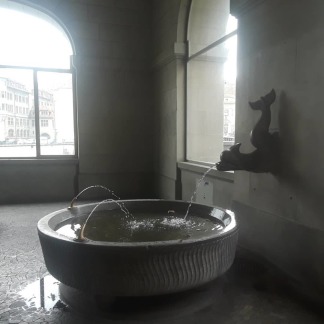 Similarly, public drinking fountains are a great amenity. Another American I met at a bar did not realize you could drink from them — to American eyes they just look decorative. But they are in fact full of clean water, many on a different system from the main tap water system in case some attack is made that would render the main system undrinkable. I’ve seen plenty of people refilling bottles with them, and a few, like me, just drinking from them. The one closest to the train station has “TRINKWASSER” (drinking water) written on it in big letters, with appropriate accompanying iconography, I guess in case foreigners are otherwise confused.

The water runs continuously. This contributes to the impression that they’re decorative, as in the US you have to press a button to get fountain water. I don’t entirely know why this is in a place like NYC, as we’re not really short on water in any significant way. Certainly Zürich isn’t. “Wasting water” when you’re immediately next to a humongous clean lake isn’t a thing. If you didn’t drink it, it would have simply flowed to the ocean some other way.

The light rail/trams are called busses (Busse) which is how they act, except that they have little connections to a power source and rails that they go on. There are special traffic lights to announce their comings and goings.

The trains proper have a well-organized system. Tickets can be bought as valid for 2 hours or for 12 hours, and are checked randomly on pains of severe fines. Round trip tickets are impossible in such a system, and the reasons why are left as an exercise to the reader.

I went to a Lutheran church on the Feast of Pentecost, and I should have remembered from church growing up that that was the traditional Lutheran time to do Confirmation. Lo and behold, there wasa a class of confirmands and the church was jam packed with proud parents and relatives. It was clear they were not used to having this many attendees, and I sat on an extra chair that had been brought out.

They said the more old-fashioned and literal “und mit deinem Geist” instead of some version of “and also with you” in response to the pastor’s exclamations of “The Lord be with you.” I don’t know what makes Americans so uncomfortable with this, but I imagine it has something to do with our obsession with informality and egalitarianism (“and with your spirit” is traditionally only said to an ordained person and it references the special presence of the Holy Spirit in ordination).

They seemed in some ways extremely low church (no one crossed themselves at any blessing, not even when one of the pastors explicitly made the sign of the cross over the congregation) and in some ways high church (the Words of Institution were chanted, the liturgy was crystal clear in affirming the Real Presence of Christ). I found this a bit confusing.

It was also difficult to tell how a normal service would have been. The Eucharistic Liturgy was definitely abbreviated (and also not published in the bulletin, and much to my dismay their version of the Lord’s Prayer was not exactly the same as the German version I knew), because of the confirmation. A lot of time was dedicated to the pastors giving personal messages to the confirmands, and some of the confirmands talking about what Christianity meant to them.

The sermon itself was also about Confirmation (with some reference to Pentecost as the birthday of the Church), about how God’s love should set you free from caring about what people think about you, with an illustration of that point being based on Justin Bieber’s song “I don’t care,” which was played over the sound system. The preacher explained that, taken with God instead of his “babe,” this was a perfect attitude to have with Confirmation.

Besides the random Justin Bieber, and one hymn where one of the pastors played a guitar1, the music was traditional. The congregation sang competently but not amazingly, the musical notation was printed in the bulletin but apparently would normally be in hymnals (which in good Lutheran tradition also contained the liturgy in different musical settings and were presented as gifts to the confirmands), and it was accompanied by an organist and a recorder2 player.

The big debate of the moment was over the “women’s strike” (Frauenstreik) that happened the Friday after I arrived. There was a debate about it in one of the magazines between two women. The criticism was that apparently, many of the signs at such events are anti-men, and that it seems overkill when women have plenty of rights and things are heading in the right direction. The woman who was in favor then talked about rape, and much to my shock, the woman who was against it said that rapes would go away if “people not fully integrated” i.e. Muslims would go away 3.

There was also an expert on happiness in another magazine who was asked, among other things, about some or another ranking that had listed Switzerland as in the top 5 happiest countries. His claim was that Swiss people were simply too conscientious to admit how unhappy they were, that they felt guilty for being unhappy as they were where they were in objectively one of the richest countries in the world.

I think a lot of this sort of thing must certainly influence happiness by survey. First world guilt is a real thing. And how much people lie on surveys or even how much they adjust their concept of what it means to be happy culturally must vary tremendously from culture to culture. Every time I see such rankings (usually used by Americans to idolize Europe), I wince and roll my eyes. It’s nice to see an expert on happiness similarly drawing criticism to them.

Most of the discussion in the magazine seemed to be about feminism (like the US, but a different tone) and about the environment (and relatedly, about autonomous vehicles, the future of city planning, and bicycles).

I mostly ate bratwursts that game with ridiculously dense bread, hotel breakfast with lots of eggs and bacon and a little bread, and only occasionally raclette, pasta, or pizza. Everything was tasty.